You Are Not Alone

On Saturday, August 11, 2012, our family attended the FSMA Greater Florida chapter’s annual candle lighting ceremony. Each year, we come together on the second Saturday of August from all parts of Florida to pay tribute to those who we have lost to SMA and to honor those still fighting the disease. This year, the chapter took the ceremony to new heights by releasing Chinese fire lanterns into the night sky over Tampa Bay.

We watched in awe as the lanterns took flight, following each other one by one into the clouds. But, the last lantern, released by a little girl with Type 2 SMA, faltered. It swooped and dipped, travelling periously close to the waters below. The little girl cried, fearing her lantern was forever lost to the sea. Then, suddenly, it was bouyed up, as if given a helpful push. I took a picture at that moment, and here is what was captured: 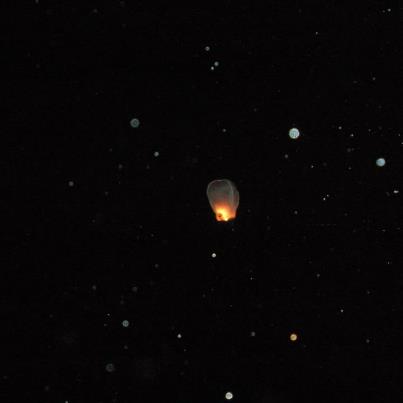 Orbs in the sky surrounding a fire lantern, which was released to honor and remember SMA angels

The orbs in this picture are not in any other that I took that night. They weren’t lights in the sky or reflections in the water. They weren’t visible to the naked eye. It’s as if our angels were there, surrounding that lantern and making it fly. Keeping alive the dreams of that one little girl and inspiring the rest of us to never give up hope. For me, it was a clear sign that our angels are always with us, helping us each step of the way as we continue their fight.

Earlier that night, I had read the following poem, by an unknown author, as part of our tribute. Little did I know at the time how close our angels really were.

You Are Not Alone

3 Responses to You Are Not Alone