The Meaning of Easter

Tomorrow is Easter Sunday. I’m not very religious, but this holiday holds a special meaning for me. Easter was one of the few holidays that my son Andy had the chance to celebrate.

Andy was just three months old in April 2009, and he was in the hospital recuperating from a surgical procedure to place a feeding tube in his stomach. By the weekend, he was recovering a little slower than anticipated, and we were still a little unsure of the new feeding procedures. So, my husband and I opted to spend Easter Sunday at the hospital with our trusted nurses and to make the best of the circumstances. Regardless of where we were, we would make Andy’s first Easter as magical for him as we could.

On Easter morning, I carefully negotiated my way around his IV, his new g-tube, and all of the wires placed on his body to undress him, easing him out of his hospital gown and replacing it with a little blue and white striped onesie that had “My First Easter” written on it. I placed a tiny hat with rabbit ears on his head and slippers with smiling rabbit faces on his feet. Andy looked so cute – and so indignant about the hat – that for a moment I didn’t even notice all of the hospital monitors and equipment that surrounded him.

The Easter Bunny, who was a hospital volunteer in full costume, hopped into his room with a basket of toys in hand, all for Andy. While he wasn’t so receptive about the tall furry stranger, he did appreciate the toys. Then, my parents and my husband’s parents came to visit, bringing more goodies for Andy and more support for us.

Andy watched us from his bed, beaming as everyone vied for his attention. While my father was playing with him, Andy even lifted his arm up slightly to hand his Grandpa a toy. In that moment, I understood how hard that he was working to please us. Even the smallest movement for him took incredible effort, and he was willing to exhaust himself to make us proud. I realized that, while the toys, clothes and the Easter Bunny were great, what he really wanted was our hugs, kisses, caresses, and smiles. And, so we spent the day gathered around him, showering him with love.

I tried to take as many pictures and videos as possible, so I would never forget a detail about this special day. Andy’s SMA was progressing fast, and I was afraid that he would not have another holiday, let alone another Easter, with us. The next day, Andy was discharged from the hospital. Less than two months later, he was gone.

Andy taught me many lessons, but this one, perhaps, was the most powerful. You see, Easter isn’t about the bunnies or the baskets of goodies. It’s about hope, sacrifice, and redemption. It’s about miracles. In the most literal sense, it’s the celebration of the belief that there is life after death. While I’m not much of a church-goer, I share this belief, because for a short time, I had the chance to hold an angel in my arms. I experienced the miracle of giving birth to a beautiful baby boy and then had to make the seemingly impossible sacrifice of letting him go. And, I know beyond a shadow of a doubt, that he lives on in heaven, just as much as his memory lives on in my heart.

Now, it’s my responsibility to pass this lesson on to Andy’s little sister, Lucy, who celebrates her first Easter tomorrow. Like her brother before her, I’ll dress her up in Easter finery and take too many pictures. She’ll have an Easter basket full of toys and hidden eggs to find. For now, that will be enough. But, when she’s older, I hope she understands just how precious and fragile life really is.  I hope she knows that she’s a miracle to us, sent by angels.  And, I hope she appreciates the love that surrounds her – from heaven to earth and back again.

Happy Easter from our family to yours, 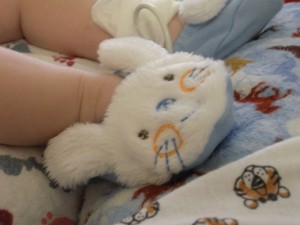 5 Responses to The Meaning of Easter