A year ago today, my friend Laurie J. called me to tell me that her daughter Abby lost her battle with SMA. Having been through the same horror the previous June, my heart broke for her and her husband. I tried to be there for them as much as I could – bringing food, offering comfort and giving advice. But nothing I could do for them would dull the pain. I have been in their shoes, but I couldn’t walk in their place. I realized that grief is a lonely road, winding and turning in different ways through the darkness, and each of us must find our own way out.

It’s been almost two years since Andy died, and I’m still negotiating my way through the grief. As hard as I have been trying to “live” my life lately and get healthy, I still get sidelined by depression, guilt and doubt.

The other day, I took Andy’s little sister, Lucy, to the park for the first time. As I pushed her on the baby swing,  she laughed so joyously and looked at me with pure delight. I laughed with her, forgetting about anything else but that moment we shared. Forgetting for once about the grief  that I carry with me. I took a picture of Lucy on the swing and sent it to my husband, parents and friends. My husband texted back that he just added it to the wallpaper on his phone, replacing a picture of Andy, and he had conflicting feelings. He wanted to move on, but…

And that was when it hit me like a ton of bricks. In that moment, I had forgotten about Andy. I didn’t think about how he would have loved to swing or to enjoy the fresh morning air, as I typically would. I didn’t think about the two year old boy he should have been, playing at the park with his sister. I didn’t think at all. For that short time, I let go of the sadness and embraced the happiness around me. Perhaps for the first time I was fully present for Lucy. With this realization, the guilt that rushed over me was overwhelming.

Back home from the park, I sat on the couch and looked at Andy’s picture, hanging prominently on our living room wall. I began to wonder, what does it mean to move on after a child’s death? When will I be able to separate thoughts of him from the feelings of despair that weigh so heavily upon me? How do you balance celebrating the life of one child, while preserving the legacy of the other? By moving forward, am I leaving Andy behind? By holding on to the past, am I missing Lucy’s present?

Since Andy earned his angel’s wings, our lives have changed dramatically. Both my husband and I found new jobs, and we’ve made new friends. We’ve been to weddings, christenings, and funerals. We’ve celebrated holidays and birthdays, especially the birth of our daughter. We’ve recently moved into a new house and are creating new memories for our family. And, with each new experience, there is a black hole of regret that Andy is no longer here.  That, while he always will be a part of our family, he isn’t a part of our future. That we couldn’t save him from SMA.

The reality is, that during the 22 months since Andy was last in our arms, the focus of our daily lives has slowly shifted. So much so that a huge chasm now lies between who we were when he was alive and who we have become.

Perhaps I will one day find this seemingly elusive balance between heaven and earth…between the past and the present. Until then, I know that I need to try to let go of the guilt and embrace the life we have, as bittersweet as it is. I have to learn to accept that it is okay if Andy is not always in the forefront of my mind, because he and I both know that he is forever in my heart. At peace in heaven, he doesn’t need me anymore, but his sister does, and I need to be here for her.

So, today, I looked toward heaven said a special prayer for Abby on her first angel day. I asked Andy to watch over us and to help us continue to heal. And, then I took Lucy a birthday party, and we celebrated life. 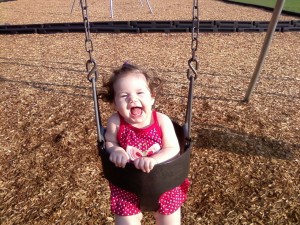 Lucy at the park

5 Responses to Moving On