Today, I took our daughter Lucy to her two-month “well baby” check-up at the pediatrician. She was weighed and measured, her milestones were checked, and several vaccines were administered. We laughed as she showed off her head and neck control – our doctor even commented on how strong she was at such an early age. So, I couldn’t help remembering our son Andy’s two-month check-up and how incredibly – and painfully – different the experience was.

Andy’s two-month visit to the pediatrician occurred just after he was released from the pediatric intensive care unit for the first time. He had been admitted with symptoms including low muscle tone and respiratory distress. He left the hospital with the working diagnosis of Type I Spinal Muscular Atrophy (SMA), which was later confirmed. Andy was completely floppy. He had severe reflux due to the weakness of his esophageal muscle and was prescribed more than one medication for it. He was so pale due to poor circulation. His chest was underdeveloped and bell-shaped. He used his abdominal muscles to breathe, causing his tummy to “see-saw” with every inhale and exhale.

My husband and I were in tears as we talked to our pediatrician about how uncertain Andy’s future suddenly was. We discussed what limited options we had to keep him as comfortable and as healthy as possible.  We arranged an order for a machine to monitor his heart and respiratory rates at home. We talked about what Hospice’s role would be in our son’s care. And then, just as the appointment was ending, Andy choked on an oral vaccine because his swallow already was almost gone, which we didn’t realize. After the visit, we rushed home, and I spent at least an hour suctioning fluid out of his nose and throat with a horrible, hospital-strength vacuum as Andy and I both cried.

Instead of celebrating the milestones that he achieved over the next several weeks, my husband and I were forced to watch Andy weaken and decline because of the severity and progressive nature of the disease. Despite our best efforts to proactively treat his symptoms, SMA has no cure and could not be stopped. Andy passed away just four days shy of  his five-month birthday, after a very brave fight. 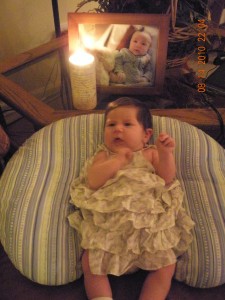 This is SMA. It took our baby boy from us, and we want to eradicate it. Through this website, we strive to raise awareness. Through partnerships with non-profit organizations and other SMA-affected families, we work to raise money for a cure. The Gwendolyn Strong Foundation is one of these organizations, and they currently are in a voting contest for $20K. If they win, the money will go towards fighting SMA.

Here’s how you can help them get there:

This entry was posted in News, SMA News. Bookmark the permalink.

3 Responses to This is SMA